The obvara testing done in the 2018 season continues to spawn more tests. The very nature of testing usually results in more questions. While the 2018 tests gave very strong indications of the importance of gluten in the obvara process, the tests did not definitively determine that it is gluten that causes the patterning which obvara is noted for. Similarly in the 2018 tests, the addition of salt to the obvara mixture (the “goo”), seemed to indicate a brighter and more distinct difference between the dark and light areas.

We decided that the only way to prove that gluten was the cause of the patterns would be to remove the gluten. And the only way to know for sure was to remove the gluten from the same flour that would be used in the “base test.” Of course all the tests would need to be pulled from the kiln at similar temperature and on the same day. In 2018 we had tried various flours which did not contain gluten, but we felt strongly that the tests needed to be made with the same wheat flour we normally use, and from which the gluten had been completely removed.

Researching ways to remove the gluten had us focus on removing the two proteins that create gluten when moisture is added to the flour. If the proteins are removed, gluten cannot form. We found that the proteins are susceptible to heat. But not just any heat, 475 F for 45 minutes of heat. That seemed to be the target temperature to get zero protein. Less heat for a longer period of time, or more heat for less amount of time, did not completely remove the protein and left residual amount of the proteins which in turn would create residual amounts of gluten. However, for our purpose of definitively proving that gluten was the cause of the patterning, we needed to have a result which was completely gluten-free and derived from a previously known gluten rich flour. We heated our normal baking flour in the kiln to 475 and held that heat for 45 minutes.
The resulting flour had a dark toasted layer on the top and was slightly brown throughout the mix. We did not sift the flour. That lack of sifting was a mistake as we found out later.

We refer to this new baked flour as “calcined flour.” It is of course not calcined in the true sense but it helps us talk about this new flour product and differentiate it in conversations.

If mixed in the normal goo recipe ratios, this new calcined flour should yield no patterns on the surface of the pots.
On the same day, we decided to also test the addition of salt to the water that was used in a normal batch of goo. We decided to add ½ pint per gallon of water. Why a ½ pint? That was decided as the measurement because a ½ pint cup was handy and the volume seemed to be hefty enough to make an impact on the test.

The salt experiment was actually testing two different effects on the surface. First we wanted to see if adding the salt to the water during the mix of the goo would result in the brighter surfaces we observed in the 2018 tests and, as large amounts of salt is widely known to inhibit the development of gluten, we wanted to see what a substantial amount of salt would do to the patterning on the surface of the pot. This test had mixed results. The test did however indicate that further testing might be warranted.

If this line of adding salt is pursued, a couple of parameters would be refined. First, the amount of salt that might affect the mixture is not known. It would be helpful to know the upper and lower limits that cause effects. Various amounts of salt additions need to be tested. Secondly the 2018 test of salt had salted water added to the goo just prior to the immersion of the test tile. So the last minute addition of salt and/or the extra water may have an impact on the results. This last minute addition should be tested with varying amounts of salt and a known amount of water. Additionally, it is not know what the effect of the water to flour ratio might have on the obvara process. Testing of that water to flour ratio might help to understand the
dynamics of the salt test done in 2018.

The salt test on the day did indicate that the upper limits of salt in the goo might have been approached as the patterning was very limited. That salt inhibits the development of gluten and gluten is the primary cause of the patterning in obvara, the limited patterning observed in the tests could have been expected.

Two surprise results are present, we would have expected the base line at 1125 F to have resulted in a lighter brown, common with cooler temperature in obvara. This may actually be a normal effect from the regular goo recipe but when viewed against the two “inhibited” tests seemed darker and abnormal. While on the low end of normal obvara firing, 1125 F is within the range of effective obvara patterning.

The second surprise is the calcined flour test at 1325 F. We would have expected this to be a darker color than the test at 1225 F. We have no explanation of the odd result.

However, surprises aside, the trend of no patterning in the calcined flour tests was perfect and even with the lighter results at 1325 F, prove that gluten in the batch of goo is essential to the development of obvara patterning. Likewise, the trend in the salted tests, with the very limited patterning on the tests, pointed to the inhibition of gluten development in the presence of salted water. The salt test, by inhibiting the development of gluten, further reinforced our belief that gluten is the primary causal agent in the pattern development in the obvara process.

As always, if you would like to ask questions about this process and my experiments, please feel free to email me. 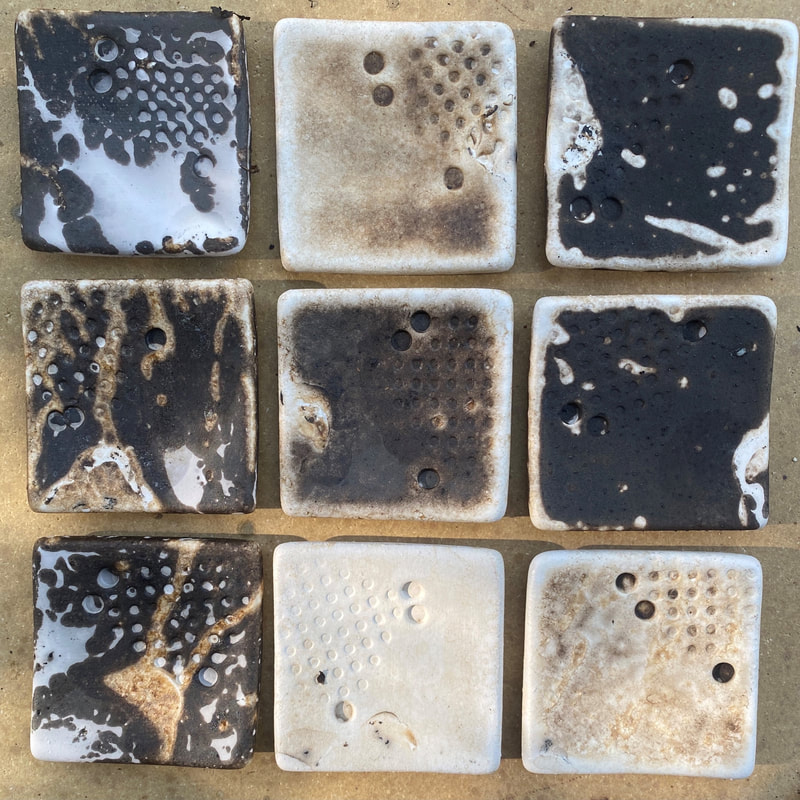 Lickinflames is known for making special yarn bowls, shawl pins and closures along with a line of mugs, plates and wall decor. Lickinflames is proud of it's 45 year history of making pottery using raku, obvara and feather decorations. The beautiful patterns created by saggar firing, especially tin foil saggar simply fascinating. All the work is handmade using stoneware clay.